With a kind heart

May I be your son?

Hello to a job with decent money

With my family, I dance in the rain.

Who do you treasure? Who are the people who’ve made a mark on your life — and what is that mark? Can you find their traces in the things that you believe now, the things that you have said and done? Last week at Back on Track, people wrote a poem about hellos and goodbyes. Some of lines are commemorate the dead, others commemorate significant farewells. It also welcomes in the new, opens a window to the living.

At the top and tail of this blog entry are extracts from the poem Ballad No. 4. It’s a long collaborative poem for The Office of the Dead, the last section of A BOOK OF OURS. It is a response to Ballad IV by the medieval poet Christine de Pizan — a poem that’s a list of farewells. Every few weeks we come back to this poem and add some names. Sadly some of them are recent names, claimed by drugs and street life.

Alongside poetry making was art making. Lawrence, a longstanding member of the group, arrived early and was working on his page before we had even had a chance to unpack all the art and poetry equipment. His latest page is taking shape, he’s been adding colour to his page, flashes of gold,  the luminosity of the inks, it’s reminiscent of stained glass windows. As the session went on, we observed Lawrence going through many emotions; frustration as a colour smudges, delight and pride when the artwork develops. The design of the page is directly inspired by the medieval manuscripts we have been studying, but with Lawrence adds twist of humour, his own story, his way of looking at the world, a boldness of ink and pencil.

Chris was working on his calligraphy skills, also riding a roller coaster of learning, of emotions. The members of the group are finding new skills, surprising themselves, the Book of Ours is truly a thing of delight. 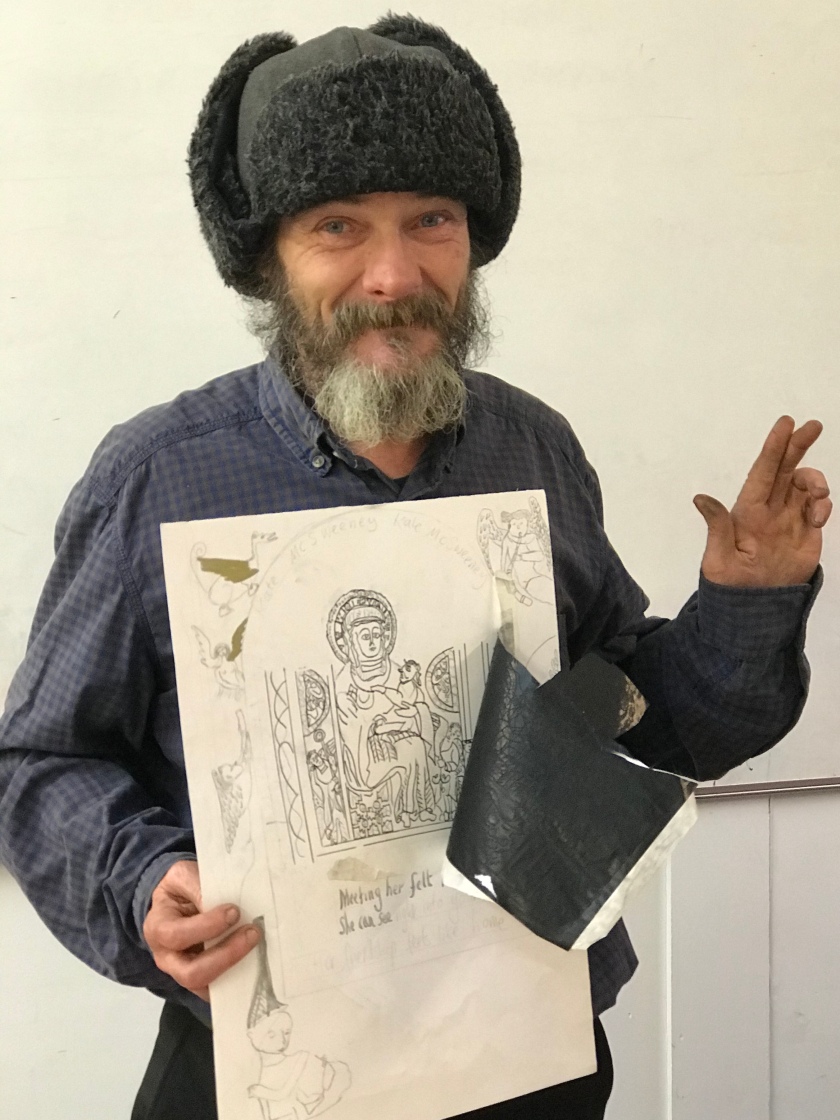 The rest of the morning was spent making triolets, painting portraits with words — portraits of people we care about, people who will stay with us forever even if they’ve gone.

It was only the second time this group has worked together and it was already an day rich in making connections and making art. As we work, the group are starting to bond, to trust one another. And as they do so they’ll encourage each another to go deeper, to be more daring, to expose the heart.

Lead you to sleep

Farewell to arms, put down your axe

The music’s over, let your plectrum rest

Farewell to my sister

Her smile. Where is she now

Whose beauty was more than ours?