One of the delights of each different arthur+martha project, is the chance to work with new specialists to gain new skills and inspiration, to see things with fresh eyes. For the Book of Ours project next year we will be joined by singer songwriter Matt Hill, this year we had the delight of working with Calligrapher Stephen Raw. Stephen writes about his experiences here. 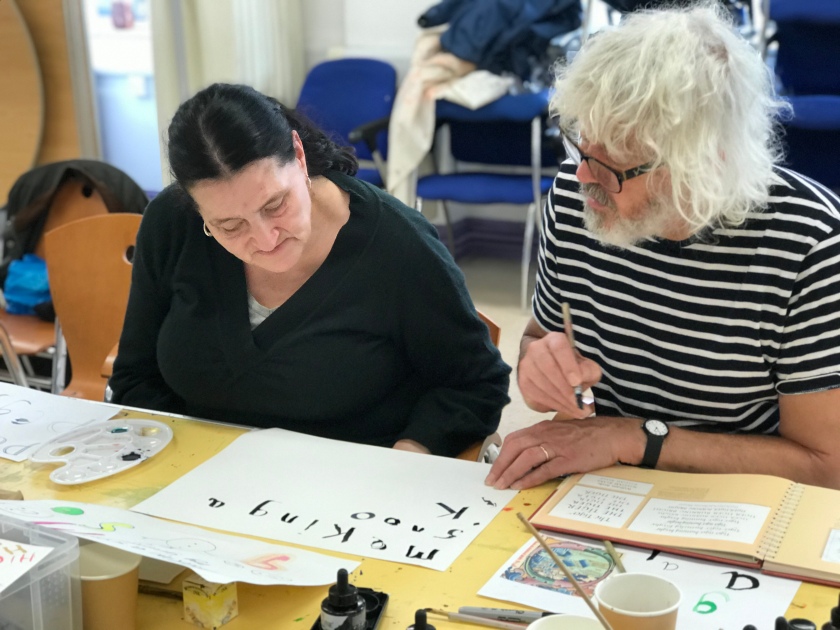 Once again I have the feeling that there is something strangely transformative about calligraphy. Even complete beginners somehow grapple with the wretched pen and enjoy their results! How can you write anything when the nib is thick one way and thin the other and only goes in one direction!? (Little wonder that Mr. Biro was so successful with his wonderful invention.) And wrestling with a quill-like pen was exactly what happened in the workshop – look at the smiles on faces proudly showing the fruits of their labour. 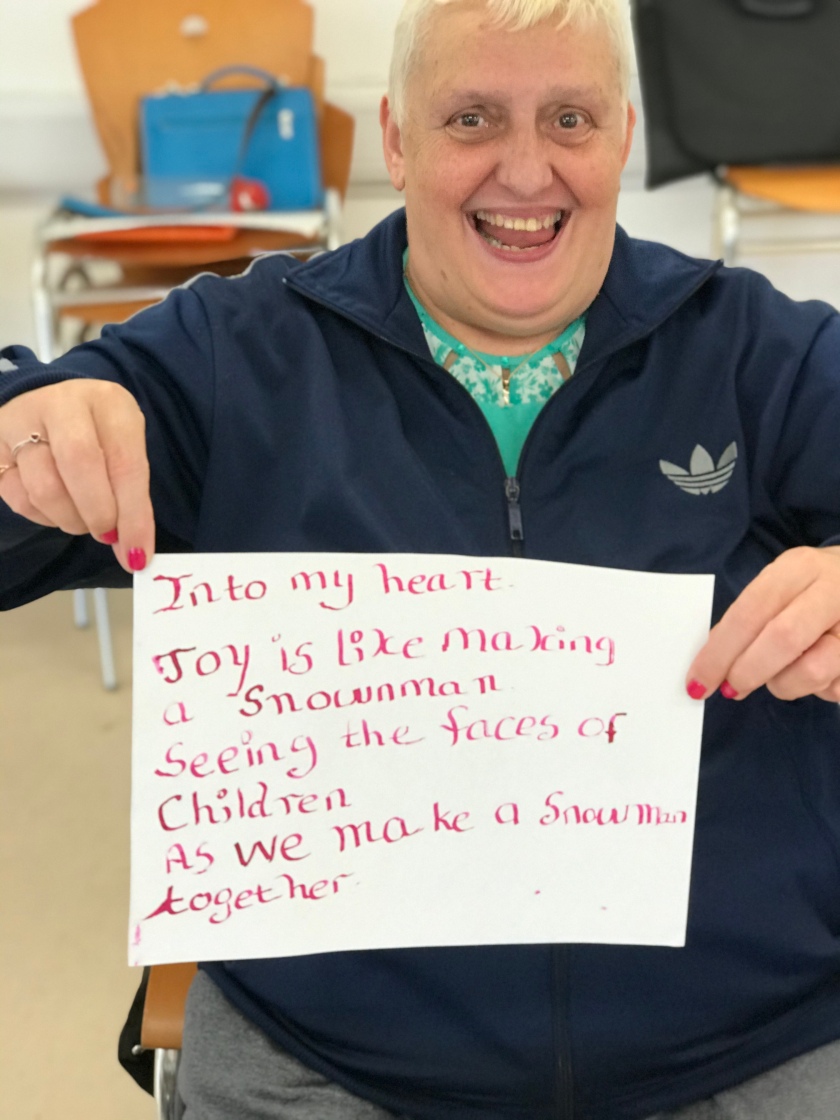 Relevant to the ‘Book of Ours’ project is the fact that some of those novice monks copying manuscripts way back when in scriptoriums were actually illiterate. But this is perhaps no surprise when you consider that our letters are only a manipulation of four simple strokes in various combinations: a vertical, a horizontal, a curve and an angle. The rest is creative embellishment. In the workshop I was telling someone about the time in the 1980s when I lived and taught in Papua New Guinea. One day Makali, a caver, came to the art school without any ability to read and write at all. Yet, when given my drawing of text he managed to produce sublime v-cut letters in wood.

He, as Booth Centre participants do, was dealing with pure form in much the same way I might approach unfamiliar Chinese or Singalese script. Nevertheless, the question remains: why our pleasure in calligraphic script? My observation and guess is that it has something to do with the very nature of an internal contrast within a single letter. Any letter has one part that grows from fat to thin and back again in such a beautiful, gradual manner. And what is more, it’s all gratis – the ‘magic’ pen does it all. Keep it flat on the paper, keep the angle the same and hey presto – letters with inbuilt vitality and variation. No need for contortions of wrist and fingers – just get a grip and off you go. I’ll risk sounding patronising but it never ceaes to delight me when it happens. 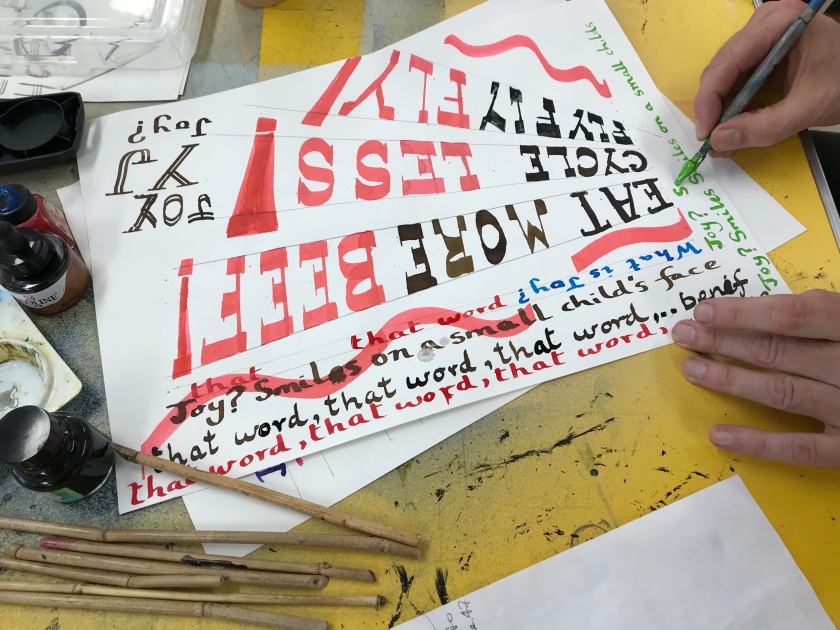 The resulting pages in a ‘Book of Ours’ visually speaks of such enjoyment. For sure, some of the letterforms might be wobbly or even ‘scuffed’ (no, not a technical term) but the connection between those monks and the Booth Centre writers is right there in front of us. The process of capturing language and making it visible has always been spellbinding. George Orwell, writing in 1946, said how language is ‘an instrument which we shape for our own purposes’. He wasn’t really talking about the way letters look but he was aware to the importance of fixing language with letters. Without script our lives would be confined to simply conversation or monologue. I love the story – probably apochrophal – of the Holy Roman Emperor, Charlemagne, who placed a quill under his pillow at night in an attempt to learn how to write. He knew the importance of it but couldn’t be bothered to do the graft of getting frustrated with that wretched pen. Charlemagne could have learnt something from those at the Booth Centre workshop who stuck with it! 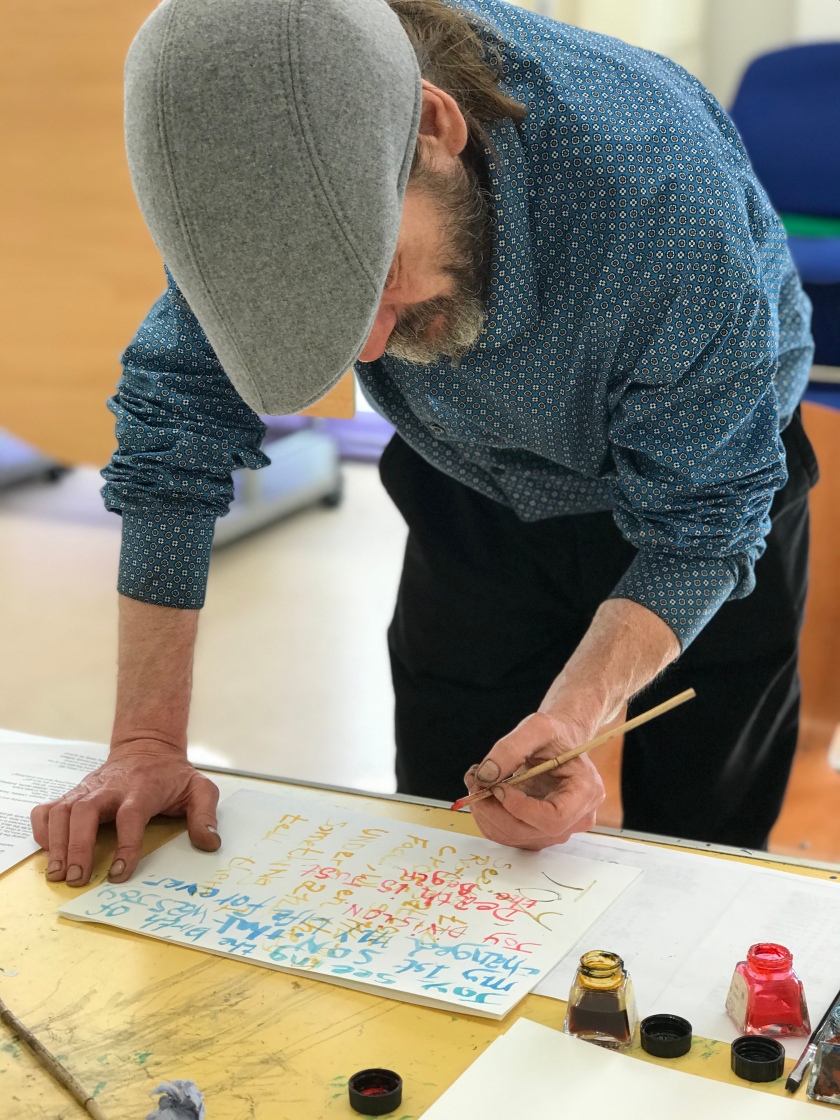